Join us for an afternoon reading of News of the Air, the debut novel from Sturgeon Bay native Jill Stukenberg.

News of the Air was selected as the 2021 winner of the Big Moose Prize from Black Lawrence Press and will be published in fall 2022. Part domestic realism, part eco-fiction, this novel centered in Northern Wisconsin is a story of family and place that unsettles.

When two strange children show up alone, by canoe, Allie Krane, her husband Bud, and their daughter Cassie must reexamine the nature of their reality at the remote Northwoods resort for which they fled Chicago years ago. To Allie, who’d dreamt of raising a daughter away from the problems of the modern world, the children are a final sign that, like the small ecological disasters lapping yearly at their door, the world is changing again. Bud finds his wife’s beliefs increasingly inexplicable, and her action in regard to the strange children as bizarre and dangerous as her response to the suicide of one of Cassie’s peers. Told in three points of view, the family’s differing interpretations of what is changing around them becomes splintering, with final consequences for Cassie’s future. 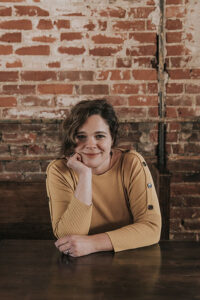 Jill Stukenberg is the author of News of the Air, winner of the 2021 Big Moose Prize for the novel from Black Lawrence Press (to be published in September 2022). Her short stories have appeared in The Collagist, Midwestern Gothic, and The Florida Review, among others. She is a graduate of Sturgeon Bay High School and spent several summers waiting tables and tending shops in Fish Creek. She is now a professor of English and Creative Writing at University of Wisconsin – Stevens Point and was a writer-in-residence at Write On, Door County. She lives in Wausau, WI.